With this grant, the Tripawds Foundation has reimbursed approximately $10,000 for passionate pet parents providing rehabilitation services for their new Tripawds. Fifty Maggie Moo Grants have now been rewarded, with an average reimbursement of $200 for consultation with a certified rehab therapist. Read all about how to get free rehab for your three legged dog or cat, and please support Tripawds to prevent this program from being cut.

Tripawds Community member rescuemom is recipient #50 of the Maggie Moo Fund for Tripawd Rehab. Read on for details about the benefits of canine rehabilitation for three legged Doberman Ruby.

My tripawd username is Rescuemom and my fur baby’s name is Ruby (Formerly Roobee 😉 ). You can read my first blog at rescuemom.tripawds.com. Ruby is a 5-year-old, 80 lb. red Doberman. She was hit by a car in October 2017. Her owner took her to the vet and learned that her right rear femur was badly broken. The owner could not afford her care and surrendered her to the Vet. The Vet contacted the local Doberman rescue who immediately stepped in and took over her care. She underwent a surgery to place a plate, a pin and cerclage wires to hold the fragments together. She was in and out of the animal hospital and staying at the rescue’s medical observation foster thru December of 2017. I was introduced to Ruby’s story in early December 2017 and was asked if I could foster her while she healed after she was released from medical observation. This is when I first met Ruby and she came to stay with me.

Sweet Ruby is your typical stoic doberwoman. She never lets on when she is in pain so being that we were strangers it was hard for me to read her at first. To date I have never heard her cry. She underwent a total of four surgeries trying to save the leg. The bone just wouldn’t heal, her fifth and final surgery was the amputation of her leg on 10/31/2018.

I learned quickly that Ruby loved everyone and every animal in my home. She nuzzles the cat, she cuddles with the peekapoo and happily shares her bed with the other Doberman. When the neighbor’s 5-year-old granddaughter came over she immediately laid her head on the child’s shoulder. My original goal in fostering Ruby was to get her healthy, heal her broken leg and find her a home with a large yard and children she could love. This all changed when the last attempt to save the leg failed and I was told that euthanasia was being seriously considered.

I am a foster failure. I couldn’t imagine letting this sweet girl go through four surgeries, a full year in and out of hospital confinement, multiple months of wearing the cone of shame only to be put down after the last fixation failed. The day they mentioned euthanasia I officially went from Foster Mom to Tripawd Rescue Mom of a Tripawd that wouldn’t walk and I am absolutely terrified. Ruby is 6 weeks post amputation now and is still refusing to walk. I have tried multiple harnesses, bribery, physical therapy (water treadmill and passive range of motion) and tough love. The rehab therapist I usually use for my foster pups saw Ruby multiple times but said that she cannot help Ruby. She sees no physical reason for her not walking and believes that something in her head is stopping her.

I first came across Tripawds while searching the web for information when I learned that Ruby was facing amputation. I knew nothing about having a three-legged dog and wanted to learn everything I could while waiting to bring her home from the vet. I reached out to the help line when I brought her home and she wouldn’t walk. I reached out again when the physical therapist gave me the news that she couldn’t help Ruby. I was losing hope when Jim told me that Tripawds would pay for a second opinion. Through the online search I found Town East Galloway Animal Clinic and Rehabilitation Center. I was able to get an appointment with Dr. Chelly within the week. 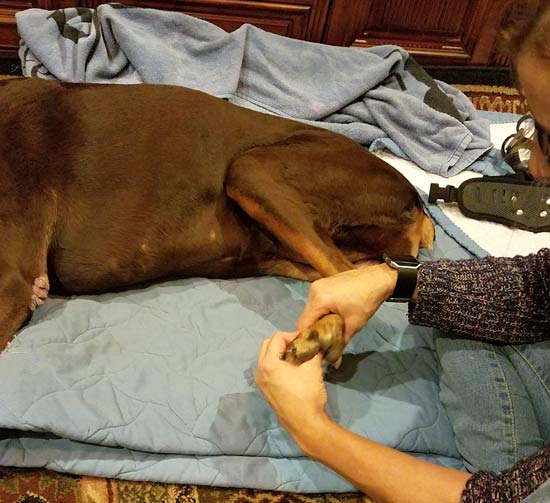 Dr. Chelly took a lot of time with Ruby. She did a complete head to toe evaluation. She massaged, stretched and assessed all of her limbs and she evaluated her gait. She believes that Ruby can walk again, but it is going to be a challenge. She recommended that I stretch all of Ruby’s limbs twice a day, and demonstrated how to do this. She told me to play with her toes, moving each one multiple times and how to perform passive range of motion. She showed me how to use the exercise peanut three times a day to strengthen the muscles in her rear leg. She explained to me that doing these exercises with Ruby will help promote her healing and help to get her back on her feet as quickly as possible. In addition, she sent us home with a loaner harness, new meds and a new diet to follow. I scheduled Ruby’s next therapy session for the following week. 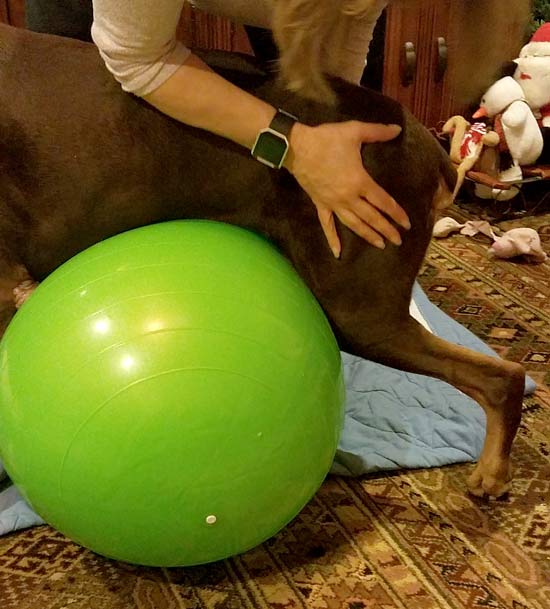 Our first appointment following the initial evaluation is tomorrow. I feel like I have seen some minor improvement since our last visit so I am cautiously optimistic. I have learned how important it is, even for canines, to stretch and continue moving soon after surgery. I have also learned that when one door closes, another one opens and to keep looking for help, especially when things appear hopeless. I have no idea what Ruby’s future holds; whether or not she will ever walk, or hop, again but I do know that I am not alone in trying to give Ruby every chance possible.