Thanks to the Tripawds Rescue Fund made possible by Karbach Brewing, we were able to reimburse Tripawds member leajer for adopting another three legged dog in need from a local shelter…

We have had a tripawd dog for many years. We adopted Star from the Mississippi Animal Rescue League in Jackson, Ms (local to us) in 2009 and he has been absolutely the best dog we could have asked for. We came across Star while volunteering at the shelter and knew right away he was supposed to be with us. Star was picked up as a stray with injuries to both front legs. It was discovered that Star had been shot and his left front leg needed to be amputated. After surgery he was placed for adoption and he’s been with us ever since! We’ve learned a lot about care for a tripawd since owning Star. But most of all we’ve learned that it really isn’t a big deal to him. Star gets around and lives his life just like any other dog!

On January 3, 2017, a college friend messaged me, telling me that there was a dog for adoption in Thibodaux, Louisiana (the town we went to college and where she still lives) that reminded her of my dog Star. I always knew that one day I wanted to adopt another tripawd. When I looked on the rescue’s Facebook page and saw Morty’s picture, I was blown away. His face and eyes looked remarkably like Star’s. Most of all, it was the look in his eyes that was familiar. When I read his story, it felt like an explanation for this familiarity – he too had been shot and had to have his front left leg amputated. He had been through/was going through the same things that Star had. We knew we all had to meet Morty and made plans to drive the 3.5 hours to Thibodaux after Morty’s two week amputation recovery period was over.

There was no doubt that Morty was a special guy when we met him. Star and Morty had their initial meet and greet and after just a few minutes acted as if they’d always known each other. Morty was a bit younger (Star being about 10 years old and Morty about 2), but they had a connection. When I picked up Morty it felt like second nature, holding him on my right side with my hand under his right arm holding his chest, his left stump against my side. We signed the adoption contract, paid the fee, put his matching collar on, and took him home.
On the way home Star and Morty curled up in the car seat together. Since they’ve been home, they’ve settled into a groove. Both dogs go out to go potty together (Morty is still house-training), both dogs get treats together, both dogs sleep curled up next to us in bed, and they take turns laying curled up in my lap while I work during the day. 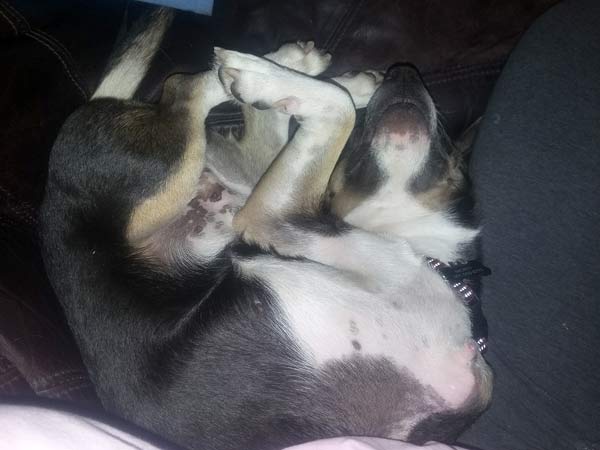 Although both Morty and Star have adjusted well to missing a leg, we do have certain considerations for them. They both get daily joint supplement treats. We have rugs on the hard floor to help with slipping and sliding. We have steps they can use to get up into our bed. Although, in comparison to other “special needs” dogs, tripawds seem to be on the lower end of the scale in terms of special considerations. Their mobility is very good, and they live just like other dogs- running, playing, jumping. Dogs put most of their weight on their front legs, so front leg amputees adjust by sitting down and laying down a lot to give their single front leg a break, and developing stronger and more coordinated back limbs to compensate. Their gait is a bit different, with a sort of “hopping” step with their single front leg, and back legs hopping along to keep up. But this is normal to us and them and they don’t think anything about it! 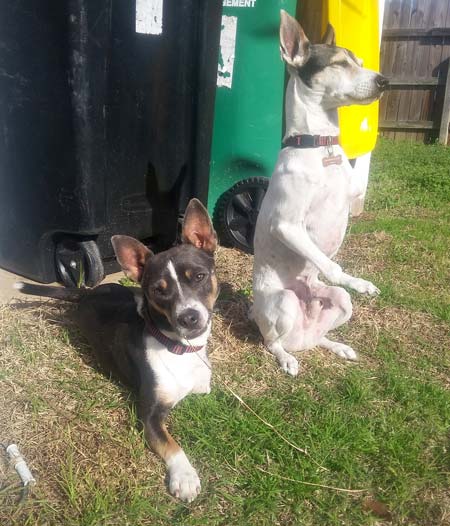 For anyone considering adopting a tripawd cat or dog, I would say that it is probably not as different from owning a four legged pet as you may assume. There are certainly considerations specific to owning a tripawd, but nothing inconvenient in any way. And tripawds carry with them a story that has shaped their personality in a way that is so special that you’ll never know why you may have questioned adopting a three legged friend!