Tripawds Community member oliviagreeneyes81 is recipient #25 of the Maggie Moo Fund for Tripawd Rehab. Read on for details about the benefits of Oscar’s canine rehab evaluation.

Oscar is my 12 year old dachshund who is brown but I guess its referred to Red in color.

In May we took Oscar to the vet again due to excessive limping and swelling of his left paw. Originally he was diagnosed with arthritis which made since because of his age. In June after a round of antibiotics and anti inflammatory we were sent to an oncologist. They did a biopsy on Oscar and determined it was Cancer and the leg would need to be removed. So on June 21, 2017 Oscar had his leg amputated and the leg was sent off for further testing to determine if the “Cancer” would return a few weeks later we got a call from the surgeon who stated that it was not “Cancer” just a bad bone infection and would not be returning. 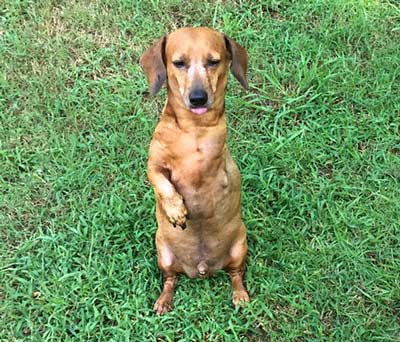 Meanwhile Oscar was at home, we built him a ramp and tried making things easier for him. We kept him in a playpen while his incision healed. While he was on medication he was doing OK with occasional falls but overall doing really well. So we didn’t think he needed any type of Rehab. But as the months went by he began to walk less and less and at the same time he stopped putting pressure on his other paw. We went back to the vet and tried a round of medicines and did X-rays and we go back tomorrow for another set of X-rays.

I read up on Georgia Vet Rehab and I scheduled that and Oscar went last night and had his first visit. They suggested a $90 harness to help him walk but I was not able to get the Harness last night but will get it Monday when we go back for a wheelchair fitting since he can’t be in the wheelchair 24/7 and they said he needs to use those back legs since they work and he needs exercise. They used the harness on him while we were there and it was breath taking to see him walk. 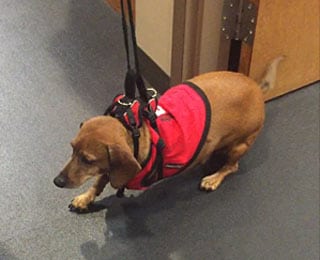 It was like watching your baby walk for the very first time. Oscar is overweight, he weighs 20 pounds which isn’t much to me but the way the doctor explained it to me is he is basically balancing and carrying his weight around on 2 legs and that’s a lot to carry around on 2 legs and the wheelchair and harness will help and he will do better once he has assistance and less weight. No home exercise plan yet but we have a follow up in 2 weeks. 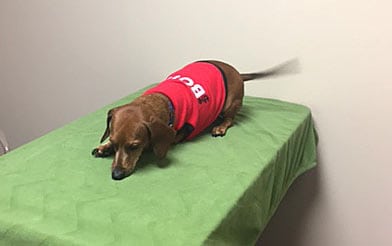 Right now they said to restrict his activity for now even if he starts to want do more while on pain medication that they prescribed. He has a progress evaluation in two weeks. He was also prescribed Omega 3 fatty acid supplement which we got and his new diet is limited to 300 calories a day. The doctor was very good at examining Oscar and determining what exact amount of food he should have daily and how often. She also said no more treats unless they are vegetables.

I feel like we (my son and I) learned a lot and how crucial exercise and weight management is for a tripod. I am pretty confident that they will bring my old Oscar back to where he can move around again.