Tripawds Community member kaiserinmom is recipient #44 of the Maggie Moo Fund for Tripawd Rehab. Read on for details about the benefits of canine rehabilitation for Kaiserin.

NOTE: This program may be cut without your support! Please read about the 2018 Tripawds Summer Fundraiser for details.

I found myself with a Tripawd on August 1 of this year – just 36 days ago. My dog’s name is Kaiserin and she is a beautiful 7 1/2 year old long haired German Shepherd. We have done a lot together over the years, competing in Obedience, doing some agility for fun and more recently, competing in Nosework. I taught her to put a basket ball into a little net and how to hold a paint brush and touch it to a canvas to paint. She can pretty much learn to do anything I teach her. She now has something new to learn – how to get through life on three legs.

Our journey to becoming a Tripawd began in august of 2017. I saw a lump near Kaiserin’s ankle. It looked to me like a swollen bone, maybe from arthritis or being hit on the leg. I wasn’t too worried at first but a month later it was still there. I took her in for an x-ray and the vet looked worried. We had a biopsy that confirmed a grade 2 soft tissue sarcoma. It was a shock. My baby had cancer. But the prognosis looked good. The lump was removed in October 2017 with incomplete margins (because the foot is a small area). I went to OVC in Guelph, Ontario for radiation and again, the statistics showed promise. One thing they were fairly certain about was the tumor would not grow back in the first year. It could surface in the future, or perhaps never. I felt good about our future. A few weeks after completing radiation, I felt a lump again. They thought at first it was scar tissue as it would be highly unlikely it would grow back so fast after radiation. It continued to grow, about a cm each week. I was told amputation was the only option. There was no point in trying to remove it again because it would only grow back more aggressive. And there wasn’t a lot of skin to close the area anyway. Further radiation wasn’t possible. I called places all over to try to find if a prosthetic could work for us but without the full tibia, prosthetics are not that successful, especially when fitted remotely. We tried a daily low dose chemo drug to slow down the growth and give her more time on four legs. The tumour continued to grow – fast!

So I made the tough decision to amputate her rear right leg (mid-femur). It was a tough thing to accept and I was sure she wouldn’t have a very good quality of life afterwards. But the recovery went well and even early on she proved she could do more than I imagined. She amazes me every day. A few weeks after, it felt a bit lost. I felt I was handed a three legged dog but someone forgot to give me the instruction manual. Here is where I thought rehab could help. I was (and still am) terrified she will hurt her remaining back leg. But I also can’t keep her in a bubble for the rest of her life. She needs to be a dog – learn how to truly live a good life as a three legged one! 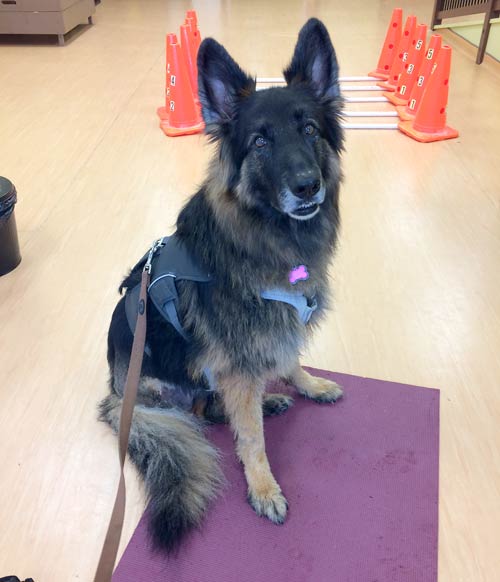 We went to see Certified Rehabilitation Therapist Judith Emery at the London Regional Veterinary and Referral Hospital in my hometown, London, Ontario, Canada. This was the same place she had surgery. On our first visit, we talked about my goals and concerns and came up with a plan to strengthen her core, strengthen her remaining rear leg, and help her balance. We started with some strength and balance exercises.

One is simple – have the dog go from sitting to standing and repeat. Others involved her standing, taking a treat and holding it at the shoulder so she has to turn to get it. We did that holding a treat at the shoulder and then holding it at the hip. She still loses balance when she turns to get the treat at the hip on her amputation side, but we are working on it. We do these exercises 2-3 times a day with repetitions of 3-4 times now but working up to 10. Each week we will add new exercises. 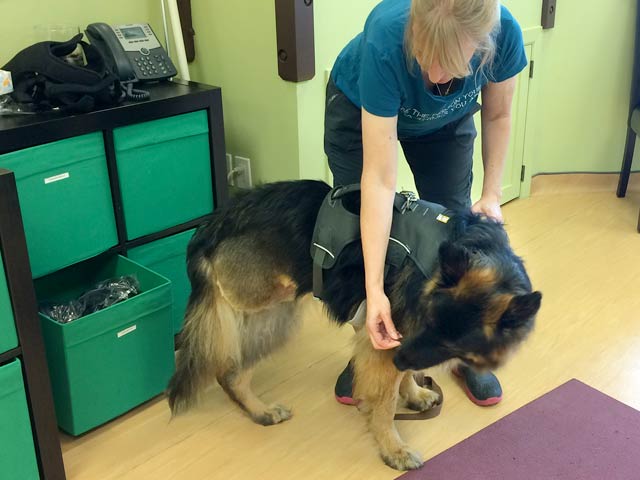 She then went on the underwater treadmill for the first time. She looked a bit panicked as it filled with water but it was fascinating to watch her legs move underwater. I think it will be an amazing activity to continue in the winter months when it is icy out and hard to walk. I also got a chance to get some suggestions on some challenges we are having. Going up stairs is one and getting in to my rather high jeep is another. I was holding her by a harness that has a handle at the centre of her body to try and help her but it wasn’t going well. The back end collapsed a lot. Judith suggested we still needed some rear end support so I now put a sling under her back end when we go upstairs. It is going well. The extra support is helping her learn how to handle the stairs. Going down by the way is no problem (normal for a rear Tripawd). I also told Judith I want her to be able to compete in nosework again and she indicates she has found the scent by touching it with her right front paw. This is hard to lift the right front paw when the right back one is gone! So we are practicing doing high 5s with both front paws so she gets used to lifting the one paw and maintaining her balance. She is doing well with this – sometimes can lift the paw and sometimes loses balance. 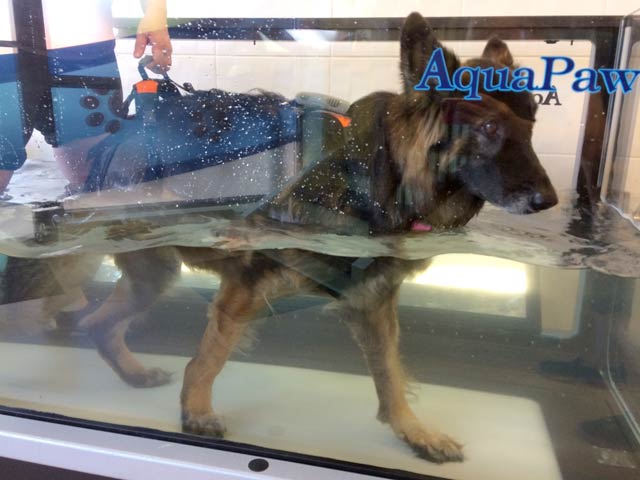 I plan to continue with the rehab for the winter and am feeling very confident that she can get back to doing most of what she did before. I was told by many people that most dogs to well on three legs but I didn’t really believe them. Now, I am starting to see that anything is possible!

~Natasha and Kaiserin (aka: kaiserinmom)