Tripawds Community member kathie2943 is recipient #83 of the Maggie Moo Fund for Tripawd Rehab. Read on for details about how free feline rehab helped three-legged cat Lucky when walking backwards after amputation surgery.

Lucky is a 2 year old domestic short hair male cat. We got his brother and him in August, 2018 when they were kittens. He was given to us by a gal who had a stray cat have kittens at her house. Both Lucky and his brother Tripod had part of their hind legs missing. Lucky had part of his right hind leg missing and Tripod had part of his left hind leg missing. I talked to a gal that I know who is a wild animal rehab specialist and she said sometimes the mother cat overgrooms their kittens and chews their legs off so we think that is what happened to both Lucky and Tripod.

Lucky had a right hind amputation on June 1, 2020 because the leg bone and muscle had poked through the skin on his partially missing right leg. I took him to the vet and the vet said he could do an amputation or put him down so I chose to have Lucky’s leg amputated because he is a loveable, laid back cat and I believe Lucky still has a lot of life to live. When Lucky’s leg was first amputated he walked backwards at times. Also he was raising his amputated stump and would fall over or fall on his back trying to get his balance. I googled “amputated cat walking backwards” and found Tripawds.

A webinar from Tripawds by Jim and Rene was scheduled for the next day so I registered for it. I called Tripawds after the webinar and talked to a volunteer and she suggested that I talk to Rene. Rene emailed information to me about cat amputations and cats walking backwards and gave me information about Care Center in Cincinnati. I called Care Center and took Lucky to see Elaina Moore, RVT, CCRP on July 14,2020. Elaina was very helpful and gentle with Lucky. 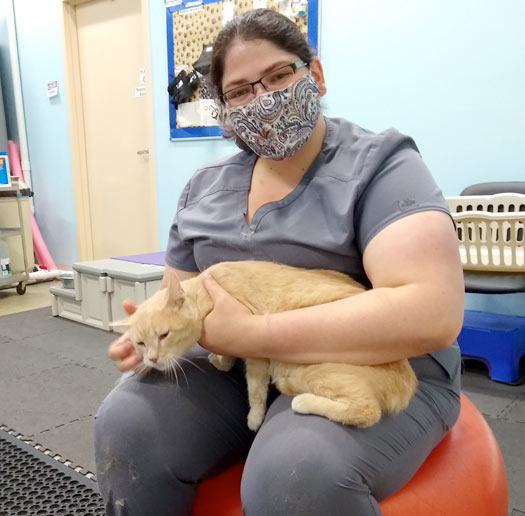 By the time I saw her Lucky had quit walking backwards and his balance was improving. She treated his leg with laser and demonstrated a passive range of motion exercise for Lucky’s left hind leg. This is to gently flex and extend the left hind leg since the weight and stress is on his left leg since his right leg is amputated.