The third Ruffwear Web Master harness donated by the Tripawds Gear Fund went to  Janet (aka: emmett143) for her three legged Labrador Emmett in New Hampshire. 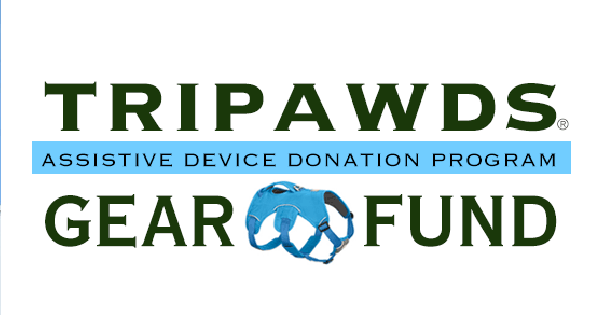 Learn more to see if you qualify for a free harness, or Support the Tripawds Foundation to help more Tripawds and their people!

My name is Emmett. I’m a four year old loving, happy-go-lucky Labrador, and I was sadly diagnosed with Osteosarcoma in my lower left front ulna bone on February 26th, 2018. My family was so sad when we got the news, because I’m still so young and full of life! I’d never had any health problems, so this was a shock!

I had started limping a little in the beginning of February, and my mom thought it was because I played too rough with a chunk of ice in our backyard. She wouldn’t let me out unless I was on my leash, and I wasn’t allowed to rough-house because she wanted it to heal. She even did cold compresses on it for me and wrapped it up for support. Then my ankle started to swell a couple of weeks later, and I could barely walk on it, so she took me to my doctor, and that was when we found out the terrible news. My mom cried for a week straight, she was so sad…she tried to hide it from me, but I could tell she was very sad.

I had to have my leg amputated on March 9th because it was hurting so bad, and we didn’t want to give the cancer any longer to have a chance to spread – even though we know it could still spread with my leg gone. They tried to get it done sooner, but there was confusion with whether my doctor could do it or not, so my mom and family took me to a special doctor to do it…not to mention my family wasn’t prepared to have to pay all that money. It’s been three weeks since my leg was amputated, and everyone says I’ve adjusted well. I was used to not walking on that leg anyways, it was just getting in my way of playing before…now that I’m almost healed I can play a little better!

I did try to play a little too soon after my surgery, and I got a Seroma on part of my incision, that I snuck and licked at a few times, which caused it to become infected. But my mom brought me back to my doctor and I’ve been taking medicine for it, so it’s a lot better now. I’m almost completely off my pain medicine now, too! I don’t like that stuff, it makes me feel weird and sleepy. 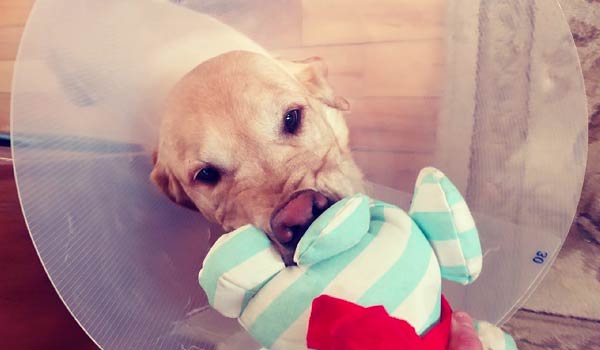 I go to see another doctor on April 3rd, I hear they are called an Oncologist. That doctor is going to want to give me medicine to hopefully kill any cancer cells that might still be in my body. Something called Carboplatin, and they are saying I may need it four times. Hopefully my family can come up with the money for that, because I know how much they love me and don’t want to lose me at such a young age…I still have a lot of puddles to hop in with my boys! 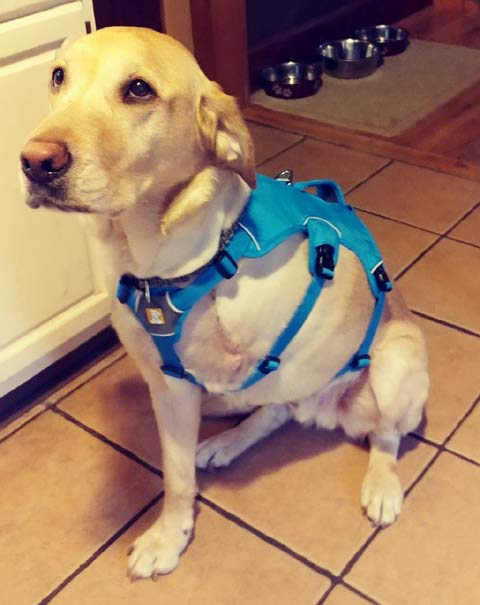 Oh yeah, and my mom also got in touch with the very nice people at Tripawds and applied for a Ruffwear Harness grant for me, so when we go for walks or hiking or fishing, or car rides or anything really – they can help me if I’m having trouble with my balance…and she actually got it! It feels a little weird at first, I’ve never worn anything like it – but I can’t wait to wear it when we go places so they can help me get around easier!

Thank you Tripawds for my harness and supporting me in this, I feel like a special pup and am looking forward to kicking cancer’s butt!