The Tripawds Foundation ASAP grant #14 goes to Tripawds member mmrios to help pay for amputation surgery on Tails the newborn Tripawd puppy. Read on for his story, and learn more about the Tripawds Amputation Surgery Assistance Program to see if you qualify.

On February 21, 2018 a stray German Shepard roamed into our lives, she bore a single pup under a scrap trailer near our yard. Honey, which we’ve since named her, allowed me to crawl under this trailer, and retrieve the tiniest of pups, and place them both in a more suitable environment.

It was obvious from the beginning of this chance event that something was a skew, and it wasn’t the ease to which she trusted me, no, this pup’s foot looked off, a different color from the rest of his body. We kept an eye on it, not sure if it was only dark pigmentation setting in, or dirt. Tails, which became his name almost immediately, was healthy in all other regards. A day later, a sharp turn of events ensued, within what only seemed like hours, Tails had no trace of visible skin on his entire right leg, all his muscle and ligaments were fully exposed. 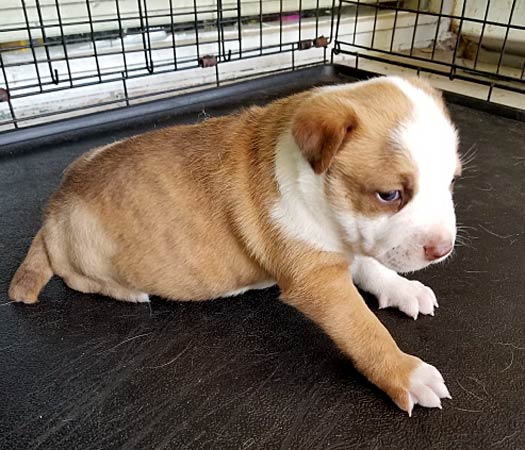 We rushed him to the vet, whom diagnosed it a severe corrosive chemical burn, and immediately started a regimen of antibiotics and topical cream. During this critical phase, it was difficult to keep focus that I was doing the right thing. His poor leg was raw and mangled, and it hurt just to look at him. Keep in mind, he was at these moments only four and five days old. This poor pup, with his eyes closed, hadn’t even seen the world yet, but had felt enough pain for a lifetime.

Only a day and half went by, before we went back to the vet, the situation was worsening. The vet decided that an emergency amputation would be our only avenue. Tails lost his entire right rear leg and ironically half his tail, on February 27, he was less than a week old. There was much doubt, but it was the beginning of a fresh start for the little guy. He healed very quickly with no complications.

Tails has spent half of his current pup-hood learning how to move around comfortably, and the other half playing and rolling around in dirt piles like a silly piggy. He has brought an immense sense of redemption into my life, and for that I’m in dept to him.