The Tripawds Foundation ASAP grant #30 goes to Tripawds member dse10901 to help pay for Miss Ike’s hemangiopericytoma amputation surgery. Read on for his story, and learn more about the Tripawds Amputation Surgery Assistance Program to see if you qualify for pet amputation financial assistance.

It was gradual. I noticed one day my dog Ike, age 8, had a small lump on his front left paw right around his ankle. It was a weird spot for a fatty tumor, but I was hopeful that was all it was, since it seemed not to bother him. However, as time went on it grew bigger, faster, bothering him more and more. I was eventually able to get the money together to take him to his vet for discussion of what it was and how to treat it. They took a sample to figure out what it was, first and foremost. That was when we got the news that he appeared to have Hemangiopericytoma. And worst yet, because of the placement and size of the tumor, he was not viable for either radiation or simply removing the tumor. The only options I had were to attempt medication to see if it would help slow the growth at all… or to amputate his entire leg.

Considering his size and age, his vet was weary about it. I was too, honestly. We attempted the medication in hope that it would slow or halt the growth. But it didn’t. It grew and became more painful, leading to Ike licking it raw. This is turn led into an open sore, require more treatment and meds. The sore healed… only for him to suddenly tear into it again. Now it was two open sores… Then three. And we knew what had to be done. The vet and I discussed it over and over, the risked were made clear. But ultimately, it was the best decision for a long, mostly painless life. At first his surgery was somewhat far off. But his sores refused to heal. The worsened and worsened, refusing to heal. His surgery, despite monetary issues, was moved to as soon as his vet was available. 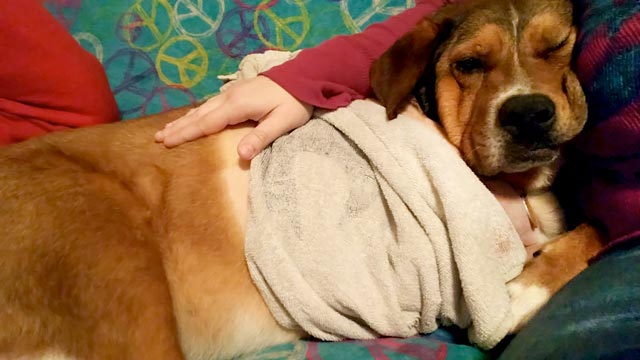 Now, Ike is home. His growth is sent off and his front left leg is gone. He’s clearly tired and struggling with his balance. But he seems more at peace. Even with his healing, he is in less pain than when he still had his leg. His vet has prescribed rest and pain medication. And come a week and a half, once his stitches and staples are removed, we begin the biggest hurdle of physical therapy as I guide him and help him learn to live on three legs. He’ll need to adjust to climbing stairs, to using the rest room, to simply sitting and standing without a fourth leg. But he’s stubborn. 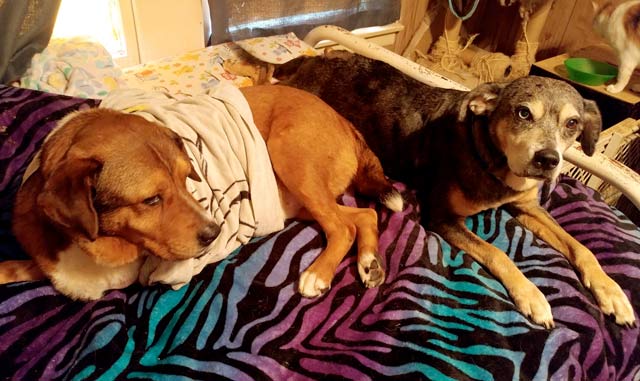 Only two days after surgery and he’s eating, drinking, and using the bathroom like normal. A little unbalanced, but it doesn’t stop him. He tries to follow his sister from another litter when she bounds off to bark at something. He stands on his own to try and follow me when I take my eyes off him for even a single moment. He climbs the bed when I turn to change. After everything and every worry, it seems he’s not going to let this hurdle slow him down. He knows what he’s about and he’s not afraid to tumble here and there, especially since he knows I’ll be there to pick him up when he needs it. Here’s hoping he lives many more full and happy years.