The Tripawds Foundation ASAP grant #34 goes to Tripawds member believeinopal to help pay for ex-racer Opal’s hind leg amputation surgery. Read on for her story, and learn more about the Tripawds Amputation Surgery Assistance Program to see if you qualify for pet amputation financial assistance.

From the moment we saw each other 10 years ago we both knew that we were meant for each other, an instant bond that would grow into more than anyone could have ever predicted! Now, most would think that this “connection” was about two people who fell in love but you see, there was, in fact, a great love for each other although, this love exists between a disabled girl & a rescue Greyhound from West Palm Beach, Florida. Hello everyone, my name is Stacie & since a little girl I have ALWAYS wanted to be a veterinarian, however, that childhood dream turned into an unimaginably shattered one when, at the young age of just 17, I broke my neck diving into a swimming pool which left me paralyzed. However, the fact that going to college to help protect & heal other families’ pets was not going to be an option any longer had quickly become positive. I have never truly felt connected to anyone in a way that resembles or has commonality with my disability but, little did I know that would change just 1 month ago!

The story began 10 years ago when I set out on a mission to still find a place in helping animals even though I live my life in a wheelchair. The love I have for animals, especially dogs, made the decision quite easy when deciding to adopt a Greyhound since the demand to adopt & save the lives of these uniquely gorgeous ex-racers is in such dire need.

In 2018 Opal began developing “pimple-like” cysts on her left hind leg, at the knee area. At first, we didn’t think nothing about it until the one cyst began to grow larger so, naturally, we brought her to our vet which confirmed it to be a soft tissue Sarcoma, therefore, she wanted to debulk it, which at the time seemed like the overall best option, however, beings that Social Security is my only means of an income I opted for a second opinion of our small town “farm vet”, not as a diagnosis but rather a second quote for treatment, little did I know that this would turn into her losing her leg.

Fast forward to October of 2019, we sought a 3rd opinion of another veterinarian clinic in our area, which has a vet who likes dealing with but, is not a specialist, in Oncology medicine because the “farm vet” did not gain a clean margin when trying to remove the sarcoma & it returned angrier than ever. After the consultation the vet said she, nor any of the vets were trained well enough with cancer to debulk or remove this sarcoma once again so, she referred us to a specialty hospital in Pittsburgh, PVSEC. The following week we met with a surgeon who did a met check and all was clear, no sign of mets to the lungs or elsewhere. We drew labs and they were incredible. With the surgeon feeling rather confident that she could remove the entire tumor, even though there wasn’t much skin to close it shut & with the skin on a Greyhound being so thin, we still left more confused than ever because of the quote we were handed. They say that you can’t put a price on love but, sadly, when the quote was almost half of my yearly income I simply did not know how in the world I was going to pay for this, especially when the tumor didn’t look “too bad” at that point. And, because I chose to adopt her I feel as if she is my child so, I just couldn’t ask for the help from my family, especially when my sister was having to pay for chemo treatments & surgeries at the same time and at the same hospital for her little fur baby Brady (who very sadly passed away just 4 days after Opal’s amputation surgery).

As the weeks passed I struggled with selfish, yet rational thoughts fighting back and forth in my head as to whether or not I could even handle the idea and site of my happy little girl who still believes that she is at the racetrack as she runs through our ranch home and up and down my ramp in the garage. But, as more time had passed my mother and sister while taking care of Brady, were having to take more care of Opal & her tumor, as well. Every day wrapping & padding her knee, in addition to, giving her many supplements that I thought would help reduce and/or halt the growth but, the tumor quickly became worse. Splitting off into multiple nodules, turning beet red and then opening up. At that point the decision was made for me, I had to call our local vet to schedule the amputation surgery. All was moving quickly and in the right direction until the night before the surgery, her leg had become weak and she fell and cut her foot. It took a while to stop the bleeding therefore her surgeons decided to cancel the surgery and run tests to check her clotting factors & additional blood work. It was so heartbreaking to see our girl having to deal with all of this even though I had her on GABA and Rimadyl for pain. She wasn’t suffering but, she was quite stoic can endure pain.

While waiting for the results to come back her leg had developed into a bloody mess, literally. Emergency surgery had to be performed. A father & son team of surgeons performed the amputation, all went well and she came home after a long 13 hour day. Upon returning, it was a huge pill for me to swallow as she walked in the door, even though the vet techs put a t-shirt on to try and cover the large area of stitches along with the shaving that went to the middle of her back. But, this did not stop our resilient ex-racer. After just 2 days of resting and almost losing her life, Opal began to quickly learn, with the help of a pelvic sling, how to get up from the floor and walk down the ramp to go outside. She was doing as well as expected until on the morning of day 2 post-surgery my mom had noticed that her entire “good leg”, groin area and underbelly had become entirely swollen with sagging reddish-purple color skin. I immediately called the vet, described her symptoms to the vet tech and waited for her vet to call me back. In the meantime, within a few short hours, the reddish-purple color had begun to trail up into her chest to what “looked as if she had a necklace” (as the Dr. later described it as) and she began to shiver, pant excessively, whine and lethargically lay on her side. We rushed her back to our vet for what had developed into an infection in her blood that turned into sepsis. Our poor, yet strong girl, who just had to go through surgery just a few short days ago which took a part of her body, was now having to deal with a 3-day hospitalization & possibly a fatal situation that could ultimately take her life now, as well. It was touch & go for a while but, after the agony of 3 days in the hospital & receiving IV antibiotics 3xs a day, IV fluids, as well as, being down to 45lbs from 65, Opal was able to return home on 3 oral antibiotics along with various pain and inflammation pills. The next few weeks took a lot of strength, courage & hard work but, ultimately this sad & life-altering situation that Opal was handed ended with a happy three legged girl who is now walking without the sling, galloping and even going up and down the garage steps all on her own, once again, just like the little independent diva she once was on four legs! 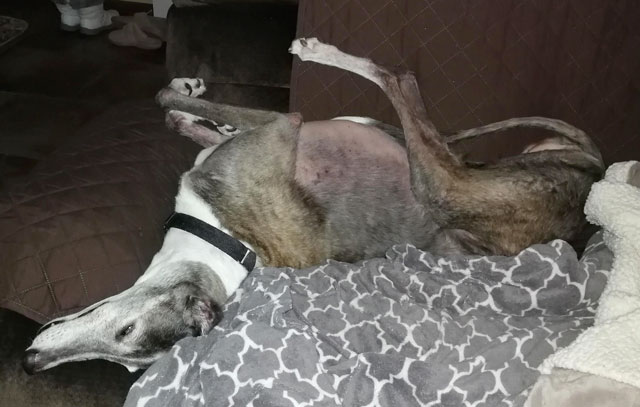 So, as our “story” ends for you today, it has just begun for our Opal, who continues to make progress each & every day of her new disability. And, as I had lost the use of both of my legs, she the loss of one, the commonality is not focused on our DIS-ability, but in our ABILITY to learn, adapt & survive!