My donation is in memory of Quincy, our beautiful dog who became a Tripawd for the last five months of his three-and-a-half-year life. I don’t want to say much about the end of his life, but sadly the cancer in his rear leg was eventually diagnosed as hemangiosarcoma, an awful and aggressive cancer that sometimes manifests as bone cancer. It was a rare and devastating diagnosis for such a young dog. Quincy was given three to five months; he made it four. The amputation of his leg, performed by the talented and caring vets at UC Davis Veterinary Hospital, greatly improved his quality of life. Tripawds.com was an invaluable resource for us as we navigated a treatment that seemed very extreme and scary, but ultimately gave our dog his life back for a few precious months.

What I could talk about for hours are Quincy’s beautiful soul and unbreakable spirit. We got him as a puppy, when he was around five months old. He and his sister had been picked up by animal control in Visalia, California. They had the good fortune to be scooped up by the Animal Rescue Foundation (ARF) in Walnut Creek, close to my and my fiance Gabe’s home in the East Bay. We had lost my previous dog to cancer about a year before and we were ready to give our hearts to another dog. ARF was on Gabe’s commute home and he checked their website for adoptable dogs every day. As soon as he saw Quincy’s little puppy face on the website, he knew he was something special. (I, on the other hand, did NOT want a puppy. I knew how much work they were and I didn’t think I had it in me.) That day, Gabe sent me Quincy’s post on ARF’s website; I said, wow, he’s really cute, but we’re not getting a puppy. A few minutes later, Gabe FaceTimed me and there’s the puppy running around him. I realized Gabe was at the shelter and heard him tell me, “I’m bringing this dog home. If it doesn’t work out, I promise I’ll bring him back.” An hour later, Gabe walks into our apartment with this adorable, floppy puppy. We had family visiting from out of out of town for the weekend, who graciously agreed to share their visit with our new dog. Everyone was smitten and–spoiler–Quincy worked out. He even got used to our cat (who never wanted to play with Quincy, much to his dismay). 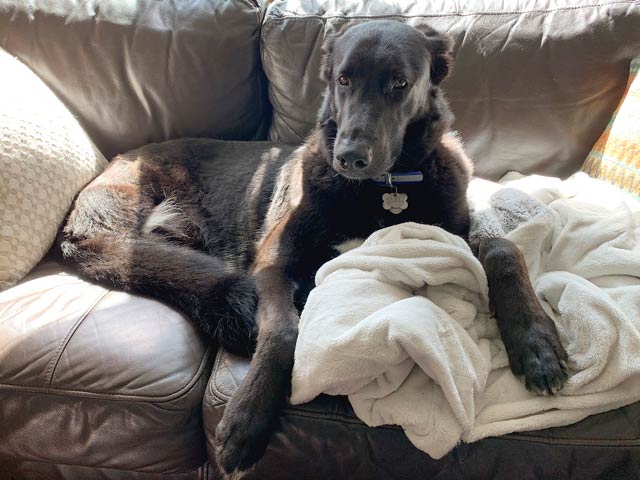 From Day One, we brought Quincy everywhere with us. That first weekend, he went wine tasting in Napa! Other early adventures included camping all around California, daily off-leash pack walks in the beautiful parks of the Bay Area with my old dog’s walker, weekend hikes with Gabe and me, and learning to swim in Lake Tahoe. He was a handful on leashed walks, but eventually he got used to the nonstop stream of dogs we encountered in our busy neighborhood and excelled at that, too. He was just a dream dog. He grew really quickly and attracted tons of attention and love from people everywhere. We got so many questions about his breed makeup that eventually we bought a DNA test. It turns out he was 50% German Shepherd, 25% Lab, 12.5% White Swiss Shepherd, and 12.5% Staffy (we must have repeated that a thousand times over the course of his life, and people still insisted he must be part Great Dane). When he was full grown, he was around 95 pounds and his back stood as high as my hips. He was very easy to pet.

Quincy was the best company. When we were out and about with him, he was playful, happy, sweet to everyone who wanted to say hello to him. He was so well behaved and could fit in anywhere. (Initially he was a handful on leashed walks, but eventually he got used to the nonstop stream of dogs we encountered in our busy neighborhood and excelled at that, too.) He also LOVED playing with other dogs, particularly the pit bulls who didn’t mind him play-biting and chewing on their thick necks. He was definitely the most dog-like of the three dogs I’ve had in my life; he would wrestle with and chase other dogs at the local dog park until he was panting so hard I thought he would pass out. That lasted through adulthood- he never got tired of playing with his dog friends. But he was also content to hang out at home with us and didn’t mind a lazy day. 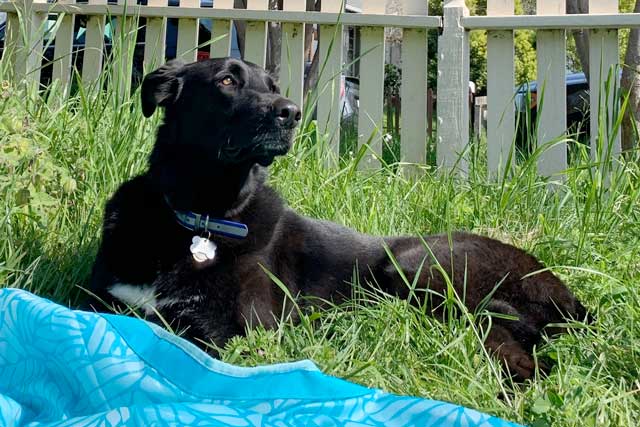 This is probably too long already, so I’ll wrap it up. After Quincy would not stop limping after what seemed like a minor injury jumping into our friend’s car, he endured a battery of tests to figure out what the weird shadows on his x-ray were. He was poked and prodded for months. Finally, his vets found cancer cells in his lymph node and recommended amputation. It seemed shocking, but it was really our only choice. To our great relief and joy, Quincy’s recovery from his surgery was relatively straightforward. Two weeks after, his stitches were out, and Quincy was back at the park, running around and even swimming! He jumped right in, with no fear at all. It brought us so much happiness to see him able to use his body to its fullest again. He was so fast, still faster than most other dogs. People were delighted by him when they realized he was missing a leg (it often took them a while to notice). One man told me tearfully that Quincy’s clear enjoyment of life, despite the obstacles, gave him faith in humanity again. Even though Quincy was a dog, I knew exactly what he meant. I was so proud of Quincy and he was a constant reminder to live in the moment and enjoy every minute of our precious lives.

Quincy, we love and miss you so much. We’re sad now, but infinitely grateful that the universe brought you into our lives. Thank you for being such a good boy.

1 thought on “In Honor of Quincy”