Tripawds ASAP grant #48 went to Tripawds member ourgirlneytiri. The $500 will help pay for amputation surgery for new Tripawd Siberian Husky Neytiri. Read on for her story, and learn more about the Tripawds Amputation Surgery Assistance Program. See if you or someone you know qualifies for our pet amputation financial assistance.

On July 27, 2021, my four year old Siberian Husky Neytiri developed a massive swelling which formed on her right shoulder. Initially this was thought to be caused from an injury, such as running and pulling a muscle, jumping, or falling. The swelling was so intense I thought maybe it had to be due to a dislocated shoulder or broken bone of some kind. I took Neytiri to a veterinarian who took x-rays and determined it was not bone related. They also took fluid samples and found no infection. They said they weren’t sure what was going on, and I was told to give her antibiotics and anti inflammatory/ pain medication for the next two weeks and see if there is any improvement.

“Dogs are not our whole life, but they make our lives whole.”
— Roger Caras

After two weeks Neytiri’s shoulder had no improvement, and she was barely using her right leg. And almost seemed to be getting worse, as she was grunting and whimpering from something as simple as readjusting while laying down. Naturally this caused me a great deal of concern, because if it was injury related it seems as though she should have been improving at this point.

I returned to another veterinarian, hoping for more understanding of what was going on with my sweet girl. The second Doctor was at a loss for what could be going on and said we would need to see an orthopedic specialist to get more answers. I was able to get an appointment the next day, and received some truly heartbreaking news. I was told the mass was most likely cancerous and that she would require a CT scan to determine the severity. I was told depending on the mass they would either perform surgery to remove, and worst case her leg would have to be amputated. This was a shock to say the least. My Neytiri is only 4 years old, just a baby.

I decided to pursue the CT scan, with the hope and prayer that she wouldn’t have to loose her leg. Unfortunately my worst fears were realized. The CT scan revealed a massive lesion which had completely taken over her shoulder muscle, total muscle replacement which had caused permanent nerve/ muscle damage. The doctor gave me two options, he said we amputate her leg right now and you can have more time with her, or say goodbye and put her down…
I am a 29 year old, unmarried adult with no children, my animals are my babies, my whole heart, and for me saying goodbye just wasn’t an option. So her front right leg was amputated right then and there. 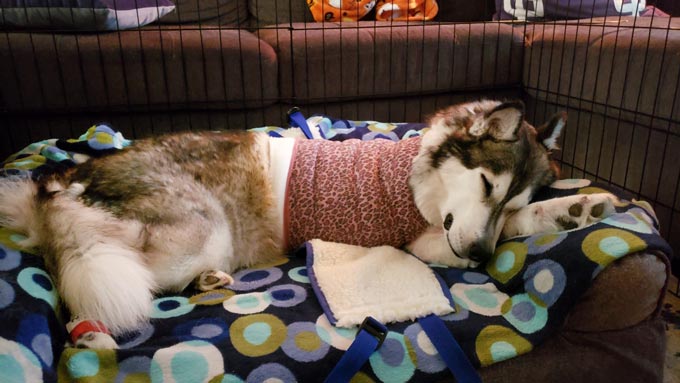 A biopsy was also taken from the lesion and sent off for testing. On August 30, 2021 the results came in and revealed that the lesion was a type of cancer called “Fibrosarcoma”. Our Doctor said that he feels confident all of the cancer was removed by amputating her leg. Chance for spread is 20% or less. I still have to keep a close eye on Neytiri, and have chest x-rays performed every 3-6 months for the next year to ensure the cancer does not spread.

Could Neytiri enjoy life as a Tripawd Siberian Husky? It’s been an emotionally troubling time knowing my sweet girl, at such a young age, was dealing with something so painful. Cancer was literally the last thing on my mind, and the heartbreak over learning this had developed was and still is so difficult to accept and understand. I often ask myself, why her? Why me? But I feel deep in my hear this happened because we are strong enough to handle it. The amputation was necessary, as it meant I get to keep Neytiri, have more years of snuggles, dog kisses, toy playing, and play fighting, and that makes it all worth it.

My Tripawd Siberian Husky Neytiri has been recovering from her amputation surprisingly well. The Doctor who performed her amputation had warned me that Northern breeds can be cry babies, and may take a while to get used to the amputation. But that hasn’t been the case for Neytiri. She has bounced back quickly, impressing the Doctor just two weeks after. It absolutely amazes me how resilient animals, dogs in particular can be. Everyday I wake up feeling so incredibly blessed to have my Neytiri here still. And in truth she has been doing better than she was when she still had her leg.This whole experience has been terrifying, hearting breaking, anxiety inducing, but also exciting, heart warming, and relieving.

I am a single adult who rents and works full time, I unfortunently have very little savings as not long before this occurred I went through my own medical emergency. That is what can make these situations all the more difficult. We love our pets like family, because they are family, and loosing a family member is something no-one wants. So when the Doctor is saying you either pay a couple thousand to save them or you put them down, what is one to do. It seems unfair to myself, and most importantly to my Neytiri, to say “you know I can’t afford that, I guess it’s time for goodbye” I refuse to accept that! And if it means causing financial hardship for myself than so be it!

Not long after Neytiri’s amputation I found the Tripawds Community, and it just filled me with so much hope for the future. Its empowering to see so many other animals, and their owners overcome such a trying time, and now living their absolute best life. It just reassures me that I made the right decision.

I also discovered the Tripawds ASAP grant and really really could use the additional help. I am grateful for the time taken to review my application and read my story

~ Heather and Neytiri (aka: ourgirlneytiri)