Tripawds ASAP grant #49 went to Tripawds member hopejk. The $500 will help pay for new tri-kitty Sugar’s amputation surgery. Read on for her story, and learn more about the Tripawds Amputation Surgery Assistance Program. See if you or someone you know qualifies for our veterinary financial assistance grant to help cover amputation surgery costs.

The year 2021 started out as any other year for us. But the last half of the year has become a crazy ride. In July I left a job of nearly five years to try another experience. In mid-August, that opportunity didn’t work out and I was without a job. Before I go into my Tripawd story, I’d like to briefly mention that I have two cats – Sugar and Spice. They are sisters that I adopted from a local shelter July 2011. They were approximately a year old; they were left at the shelter when the shelter was closed so nothing was known about them.

Now to tell Tri-kitty Sugar’s Tripawd story. Beginning of September one day I noticed that Sugar’s foot was swollen. I called and scheduled her to see the vet. We saw the vet September 7. They thought they noticed a sore so they prescribed her an antibiotic and an anti-inflammatory pain medication. Nothing changed for the better or worse. On September 21 we saw the vet again. This time they did an x-ray of the foot which showed what the vet believed to be a soft tissue sarcoma. On September 23, she had an incision biopsy to confirm. On October 4 I took Sugar to the vet to have the sutures from the biopsy removed. That was also the day that I learned the results of the biopsy – cancer, a soft tissue sarcoma, just as the vet thought.

I was told that amputation of the leg was the best option. I was, however, given the option to see an oncologist. The oncologist would be a 1 hour one way trip. Because of location of the sarcoma, the vet did not feel surgical removal was an option because they could not guarantee getting all of it. Sugar was very down and never fully recovered from the incision biopsy. The sore remained open and she wasn’t herself. I had an emotional roller coaster of what to do and why. I asked questions. I searched the internet. For financial reasons because I was out of work and because the drive to oncologist would be stressful for both my cat and I, I decided that we wouldn’t see an oncologist. I finally decided to just do the amputation.

After scheduling the amputation, I went on another emotional roller coaster. Seeing how poorly Tri-kitty Sugar was doing after the biopsy procedure, I was concerned how she would do after an amputation, after a major procedure. The one vet had already said that at 11 she was older and she’s overweight and that it would be more difficult, not impossible, just difficult for her to learn to adjust. I questioned that I was making the right decision. I went online not 100% expecting to find help, but nonetheless I was sorting through this. I came upon tripawds.com. I registered and posted in the forums. Wonderful people replied, talked me off the ledge I was on. I went through with the amputation. 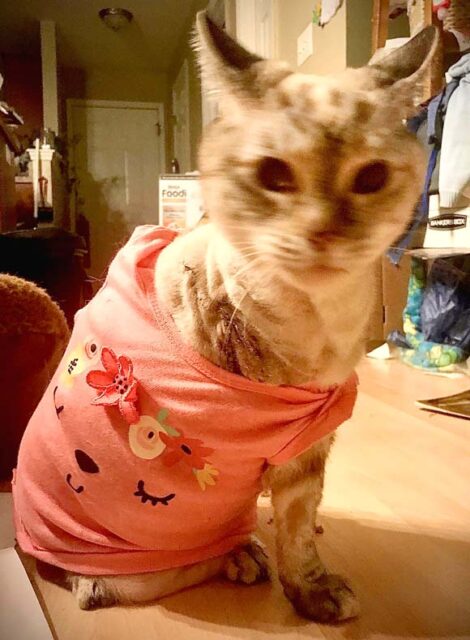 The amputation surgery was Thursday, October 21. November 1 Sugar had the sutures removed and I was told that it looked good. I must say, I have been impressed. She has long recovered in terms of energy. She bounced back from this surgery much faster, much more than from the biopsy. She is supposed to be taking it easy. I set my bedroom closet up as campsite for recovery. I have a makeshift litter box in there, bedding, and place for food and water. She was hospitalized with the vet one night. They said she was doing well so I opted to bring her home and not make her stay a whole weekend. About an hour after getting home, she was on her three feet hopping around. She scared me because I wasn’t expecting it and shortly after blood showed up on the onesie that the vet sent her home in. It wasn’t continuous so I figured it was the leaking that the vet mentioned was occurring which is natural. Without permission she’s already jumped on the bed once; I wasn’t paying close attention when it happened. She’s still got some balancing to learn, but she’s taking off pretty good literally; so much for taking it easy.

People told me and I know they are correct – 11 isn’t necessarily old. She does have spunk in her. She’s not as playful as she used to be, but she’s still fun. I read a lot about animals having pain and swelling, but we were blessed to apparently not deal with that. She remained alert and never showed signs of pain. Spice, her sister, did better than I expected. After the biopsy, Spice was always hissing at Sugar and avoiding her. Spice has avoided her a tiny bit after this surgery, but at the same time I’ve also seen them rub noses a couple times and there’s been no hissing. I have more decisions (minor ones) to make – do I want pet steps to help, do I want to see a therapist like some do as I saw there’s one sort of nearby. 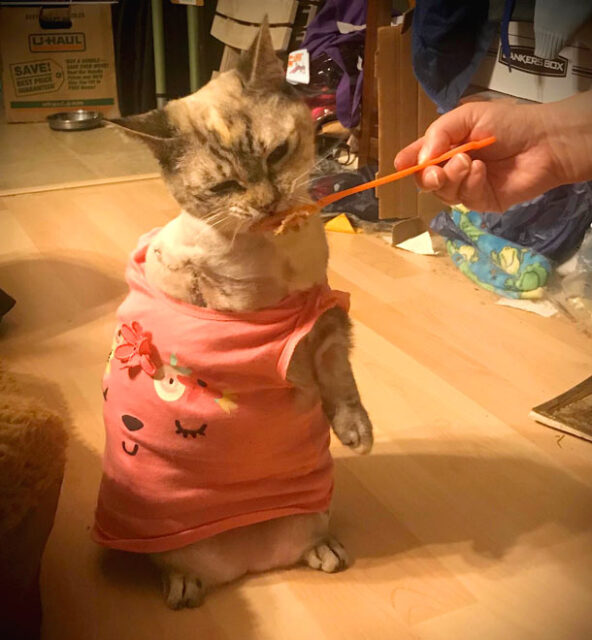 I will conclude by going back to something said at the beginning. My unemployment situation has been a blessing in disguise. I’ve been able to freely head to the vet as needed. I’ve been able to be home with her through this. Now that she’s on the road to full recovery, it’s time for me to get a job.