Thanks to the Tripawds Rescue Fund made possible by supporters like you, we were able to reimburse Tripawds member sdivona3 for adopting another three legged dog in need. Read on for the story of Tripawd Rescue Boone…

My family and I had been looking a furry family member (a dog) for about 5 months. We were in the middle of a long search for just the right dog. I had visited almost all of the pounds and shelters in the surrounding towns with no luck. I was also on petfinder.com with no luck. So I put out my search out further from my home. I was on line one day when I found a shelter called Animal Rescue Rhode Island. When my eyes fell upon the most beautiful Shepard looking mix.

He was so sweet looking and had a very shy oar about him. I didn’t even notice how special he was until I read his profile. His name was Boone and he was good with cats and dogs. He also only had 3 legs. I had to look at his picture again to see. I had thought he was beautiful in the first place and now I just fell in love. I thought maybe it was meant to be that he needed our love and support as must as we needed his.

I put in an application right then. The next day I drove the 45 min. to meet him. When I got to the shelter I told the lady at the counter who I was there to see. She gasped and said, “that’s great!” One of the volunteers took me to a large room and then went to get Boone. When she brought him in he was so scared. His ear were flat back on his head, and his tail was tucked so close to him I could not ever see it. She told me that he had been through a lot, and that he was very very shy. 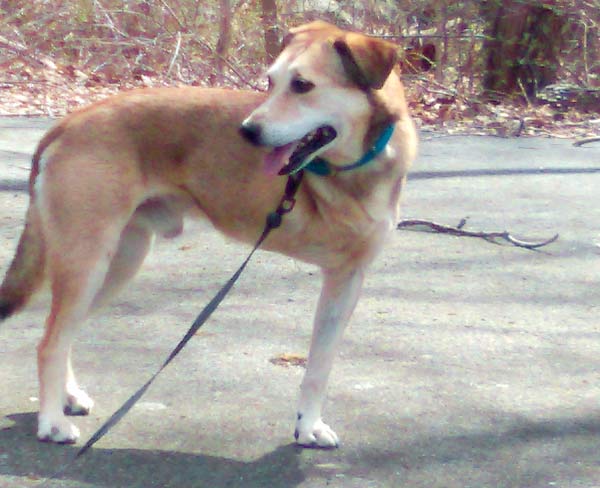 Boone had been with them about a month and a half and was just now happy to see the people he knew at the shelter, but It had to be on his terms. Any loud noises or fast movements and he would hit the deck. It was so sad to see. It broke my heart. That’s when I knew that I could help him lead a happy, healthy life with no more trauma! She also told me that he came to them from South Carolina. That he had been hit by a car, but it took animal control a month to catch him. By that time they had to take his leg. Then he spent most of the next month with the vet to recover. He was now ready to make the long ride to Animal Rescue Rhode Island.

I told the shelter that I was all in, I would love to take him home. They told me that they really wanted him to be placed with a family that already had a dog. So that would help him come out of his shell. My family a few months before had to put our dog Bo down. He was 15 and had a mass in his chest we could not fix. When he started to go down hill we had to make that awful decision to put him down. I told the shelter that I had no problem getting two dogs. That I grew up on a farm and always had a lot of animals. That was my happy place. Loving any and all animals. They said that they would look over my application and get back to me. 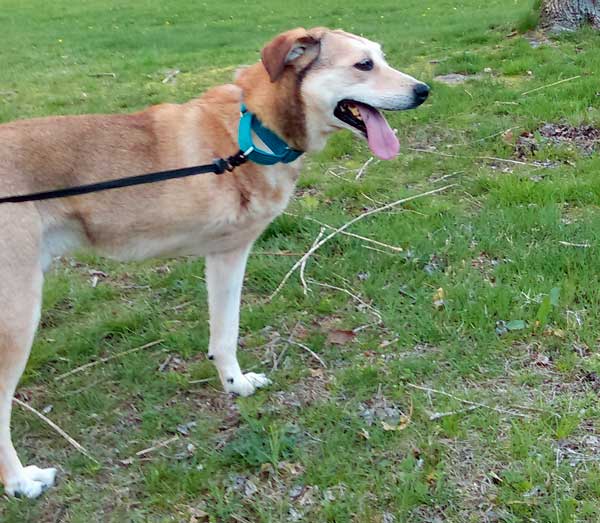 I went home and talked to my family about him. They were all excited to meet him. Two days later I called the shelter to see if we all could see him because the kids were on vacation it was perfect timing. So we headed down to the shelter. I had brought my husband and my two girls ages 11 and 16. Again we were brought into the same big room and they brought Boone in.

Boone was still so scared but when he saw my husband he went strait to him and licked his hand a little. I knew at that point that if the shelter let our family adopt Boone I would give him all the time and patience would take to make him happy. I told the shelter we would love to have him.

The next day the shelter called me and said that my application was all set and when did I want to pick him up? I said I could come get him that night. Even though I was scheduled to go back to the shelter the next day to see if I could find another furry family member that Boone could get along with. I went to get him that night I could not stand the thought of him having to stay in a cage one more day. When I brought Boone home from the shelter to get him in the car I had to pick him up. He was not able to get in the car on his own. When we got home I walked him around the yard before going in to get the lay of the land. Once in the house he went straight to the corner of my living. Where he could see all of us but we could not sneak up on him.

The spot Boone chose is at the bottom of the stairs. So every time the kids go up and down the stairs they say hello to Boone. That has worked wonders for him to relax a little bit. When it came time to walk him I had to practically drag him out. It was like that for the first couple of days. He is so much better now. I don’t even need the leash to go in the back yard. I just ask him to go out and he goes.

It took about two weeks for the shelter to find a good match for Boone. His name is Bronson. He is a bit older 7 or so. A boxer/bull dog mix. He is a smart, well trained big baby. Friendly and playful. And a great roll model for Boone! Boone has come a long way. He still has a way to go but, with Bronson by his side he is getting better every day.

When Boone hears my voice he lights up. If he can not see me. He will get up to try to see me with his tail going a mile a minute. He looks like a helicopter about to take off. If that’s not love and appreciation I don’t know what is.

I would adopt a Tripawd if I ever come across another one. I have talked so much about Boone to my coworkers I think I have talked some of them into adopting a special needs animal. They all ask for updates and new milestones. Some are small but Boone makes progress every day. Boone has given me so much more than I could ever give back to him. He has even given me a new furry family member. I will forever be grateful for Boone coming into my life and bringing Bronson with him!